Oppan Gangnam Style! The newest and zaniest dance craze ever to have hit American shores is a catchy Korean pop song released this past July by South Korean rapper and hip-hop artist PSY. The music video quickly became viral due to its highly addictive beat and unusual dance choreography. After debuting at #1 on the Gaon Singles chart in South Korea, the music video for Gangnam Style, posted on Youtube, garnered enough views to be named the most viewed K-pop song on the popular video-sharing website. 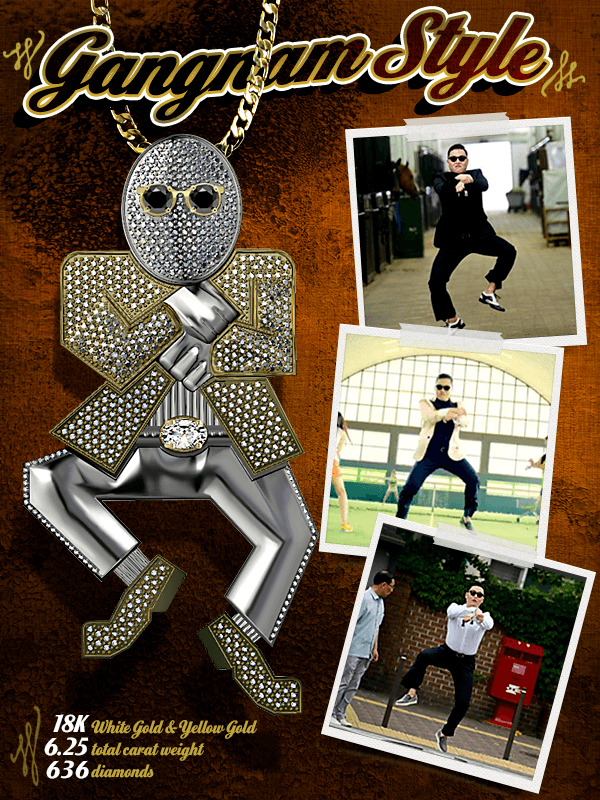 PSY performed Gangnam Style for this year’s MTV Movie Awards pre-show, and was even featured on the Ellen show to teach the “dress classy, dance cheesy” choreography to host Ellen DeGeneres and fellow guest Britney Spears. But what, exactly, is Gangnam Style? The title of the song refers to the affluent Gangnam district in Seoul, South Korea. The choreography can only be described as wildly comical yet addictive to watch (and even imitate). In the music video, PSY appears in unexpected locations of the song’s namesake district and proceeds to dance in the manner of a man riding a horse. We’re not doing it justice by describing it in words, so check out the official music video yourself:

One celebrity was so overcome with Gangnam Style fever that he commissioned Brilliance to create a custom pendant in honor of the wacky dance. This diamond pendant, in the shape of a man doing the signature horse-riding Gangnam Style dance, contains over 600 diamonds for a total of 6 1/4 carat total weight set in 18k white and yellow gold. The Gangnam inspired diamond pendant can now be custom made and purchased through our website.