Branson Landing became the scene of a romantic and quirky wedding proposal last weekend. Brilliance, the trusted online retailer of diamond engagement rings, was in pride of place at the memorable event!

Forty-one year old Lewis Holleman, a widower and father of five, came up with the “brilliant” and unforgettable idea of proposing to his girlfriend Lorena Winegartener whom he met on a dating site nine months prior. He planned the event with the single-mindedness of a man on a mission. As an opening act to the musical-like proposal, he envisioned their friends and family sitting on benches all over the park. These “bench sitters” were actually going to be part of a flash mob for the proposal.

When Lewis first though up this idea he did not think that many people would say “yes” to helping him with the proposal, however everyone wanted to join him in this event. All the participants practiced the dance moves at a local dance studio for a couple weeks prior to the proposal date (they worked on a total of three choreographed routines).

He ordered a diamond engagement ring from Brilliance with a beautiful loose diamond to present to Lorena. Lewis corresponded with Tracy Powers of Brilliance by email and laid out his proposal plans to her.

“She’ll be escorted to the bottom near the lake to sit and enjoy the flash mob until I appear to offer my proposal. Once the music starts, the water show will begin, along with fire that comes out of the barrels sticking out of the lake”, he wrote in one email.

And the result? A picture-perfect execution at Branson Landing: 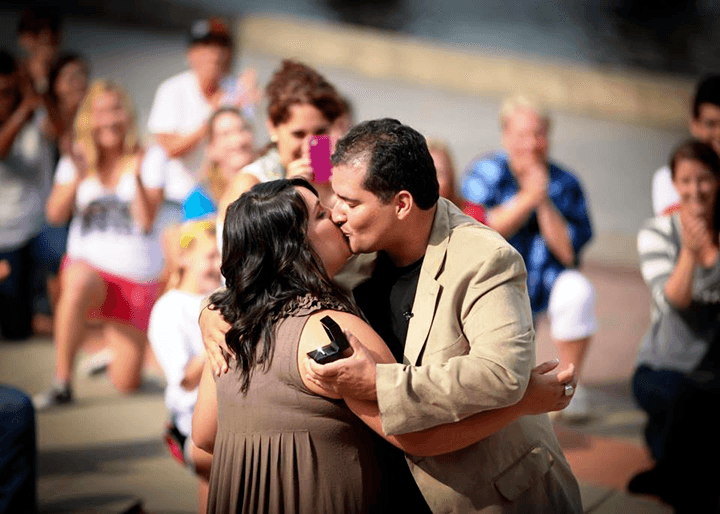 The 33 year old bride-to-be, who works as a master control operator at KY3, stood in the middle of the park with a surprised look on her face as each of Lewis’ kids gave her a flower while the dancing continued. Then the groom-to-be himself appeared and gave a speech about how much Lorena means to him. On bended knee, he presented the dazzling diamond ring and asked for her hand in marriage.

“Thank you to everyone that showed up here. I’m so flabbergasted and honored and I’m just very happy right now”, Lorena said in a KY3 interview.