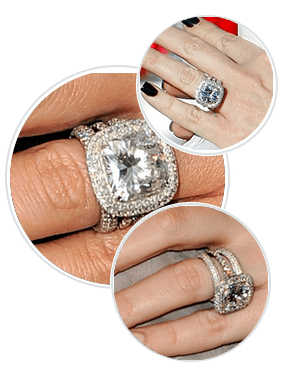 Khloe Kardashian’s engagement ring from ex-husband Lamar Odom is an absolutely incredible piece of jewelry. Featuring a massive square-cut diamond at its center, plus accent diamonds all over, it is the ideal match for Khloe’s glamorous sense of style.

Like Khloe Kardashian’s engagement ring, this incredible design from Brilliance features a cushion cut diamond at its center, surrounded by halo of accent diamonds that magnify its appearance for a look that is ultra-glamorous. This three-sided pave halo ring also has diamonds on the band, adding sparkle that seems to go on and on forever.

Born in Los Angeles, California on June 27th of 1984, Khloe Kardashian is the younger sister of Kim and Kourtney Kardashian, and has a younger brother named Rob. Like sisters Kim and Kourtney, Khloe attended Marymount High School in Los Angeles as a teen, although she was home schooled after her sisters graduated, saying she felt as though she had no friends at school. She graduated with honors one year in advance, at the age of just 17.

Khloe joined the rest of her family, including mom Kris and stepfather Bruce Jenner in the 2007 reality series Keeping Up with the Kardashians. The show was a hit, and led to spinoffs including Kourtney and Khloe take Miami and Khloe and Lamar.

Did you know that Khloe Kardashian and her sisters released a book in November 2010? The book, titled Kardashian Konfidential, was followed by a novel titled Dollhouse. Khloe wed NBA basketball player Lamar Odom, who was a member of the Los Angeles Lakers at the time of their marriage, in 2009 just about a month after the two met. Together, they released a unisex fragrance called Unbreakable. They filed for divorce in December of 2013, and Khloe kept her engagement ring as it was part of the couple’s prenuptial agreement. Khloe dated rapper French Montana for a time, but early in 2015, she renewed her friendship with Lamar Odom.

What Our Experts Have to Say about Khloe Kardashian’s Engagement Ring.
Khloe Kardashian’s engagement ring is an amazing piece of Hollywood jewelry. With a huge center stone and countless accent diamonds, it contains approximately 12.5 carats of diamonds altogether and is valued at about $850,000. Its look is thoroughly modern, yet the design is one that will never go out of style.

Celebrity engagement rings like the one Lamar Odom gave Khloe Kardashian are well out of reach for the average person, but that doesn’t mean that the same look isn’t attainable. By using the online design tools and taking advantage of the many benefits Brilliance has to offer, you can easily create a look that is similar – and much more realistic for everyday wear. Whether you’d like an engagement ring just like Khloe Kardashian’s or if you’ve got something a little different in mind, give Brilliance a try. You’ll absolutely love the way we bring sparkle to your love and life.