She Swallowed a Diamond! 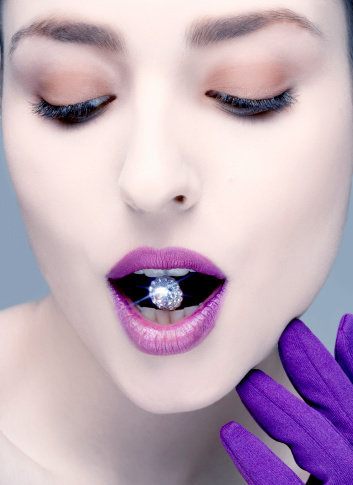 A woman from Tampa, Florida won a $5000 diamond the hard way…by swallowing it with her glass of Champagne.

The diamond was the main attraction in a fund-raising event organized by the Tampa Women’s Club, for the benefit of the Champions for Children, Kids on the Block charity. Continental Wholesale Diamonds heard of the event and donated the 1.03-carat diamond, along with hundreds of its cubic zirconium lookalikes. The plan was to place one cubic zirconium each in a flute of Champagne, with one flute holding the real diamond. The Champagne glasses would then be sold for $20 each with all fees going to charity.

All very ingenious and exciting, until an 80-year old lady named Miriam bought two glasses of Champagne, took a small sip from one…and ended up swallowing the real diamond.

She never imagined that what she swallowed was the event’s main prize. She only realized she was the winner when the event ended and jewelry experts from the diamond company analyzed all the cubic zirconia sold to determine who got the diamond. They, of course, couldn’t find it…until Miriam decided to speak up about swallowing it.

The diamond did not show up in an X-ray during Miriam’s visit, but she was fortunately scheduled for a routine colonoscopy the following day. The doctor found the diamond in her large intestine. It was put in a bio hazard bag and sent to the diamond company for analysis, where it was strained, steamed, and sanitized. True enough, it proved to be the real thing.

“Someone asked me, what if someone swallows a diamond, and I said, God that will never happen,” Andrew Meyer of Continental Wholesale Diamonds aid in an ABC interview. Well, it looks he had to swallow his words the same way Miriam swallowed the prize diamond!