What is a Mangagement™ Ring? 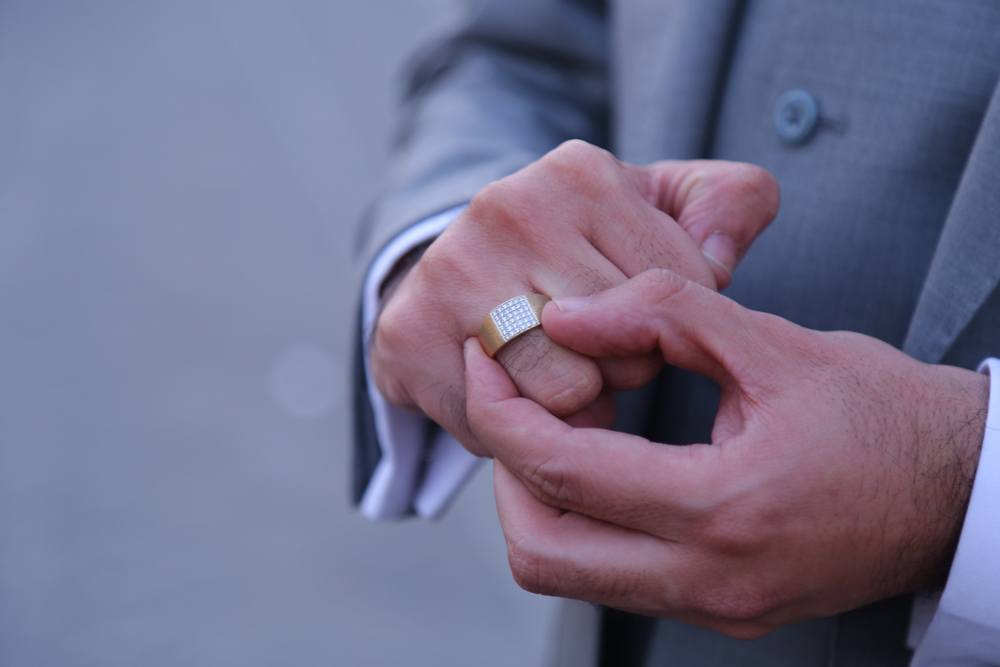 Proposing marriage traditionally meant a man presenting a woman with an engagement ring, but as traditions have evolved, so have proposals. Today’s couples don’t just say “yes” with a ring for her—men’s engagement rings are hitting the mainstream for grooms-to-be.

Mangagement™ rings are worn by any man who believes that men can and should wear the ring, too. In fact, these rings have become an accepted, proud tradition for couples who don’t wish to follow the patriarchal protocol that once defined engagement.

Mangagement rings aren’t constrained to one relationship dynamic, however. Every couple can embrace and celebrate this trend. Women can offer up a proposal of their own, or partners can exchange engagement rings. With the legalization of same-sex marriage, rings shared between LGBT couples have become a welcome addition to the engagement tradition.

In this way, mangagement rings have become a symbol of equality and the balanced order of both commitment and fidelity.

A mangagement ring isn’t just a ring worn on the hand—it is in every way an emblem of partnership, shared promises, and steadfast commitment. Engagement traditions of the past involved one ring worn only by the woman to show the world that she was “taken.” The ring symbolized her newly-minted status as a future wife, while also telling every man that she was off the market.

However, the absence of the ring on the man’s hand upheld the belief that his commitment to the partnership wasn’t yet sealed and finalized. So while the woman was clearly off-limits, the man was untethered symbolically with the absence of the ring. Mangagement rings balance this once heavily-tilted dynamic of engagement, giving an equal share of respect, love and power to each partner.

The mangagement ring has made headlines throughout the years as the rising symbol for relationship equality. However, nothing validates an emerging trend quite like the power of celebrity.

When celebrities adopt a trend, the world takes notice. So which celebrities have embraced man-gagement? Actress Jennifer Hudson gave her fiancé a ring to seal their partnership after he proposed. Musician Michael Buble also wore a mangagement ring.

Just don’t confuse the mangagement ring with the purity or promise ring! Purity rings, like those once worn by the Jonas Brothers, symbolize a vow of abstinence before marriage. Promise rings are often used as “pre-engagement” rings, for couples not yet ready to wed. Mangagement rings, on the other hand, are a promise to wed sooner rather than later.

Men can wear any of these rings, but it’s important to be clear about the meaning of your ring when you give it.

When we envision an engagement ring, the mind immediately goes to a big, brilliant diamond. The sparkling solitaire diamond ring has dominated the public perception for women’s engagement rings for the past century.

For men, what comes to mind is the gold wedding band: smooth, simple, and unadorned. Many men might prefer an understated ring for an engagement ring. In fact, many men’s engagement rings are in fact wedding rings bought for this new purpose.

Mangagement rings, however, are designed to give men just as many options as women. Men deserve to have an eye-catching ring, whether that’s with a unique design, or a dazzling diamond of their own!

There is no “traditional” style for a mangagement ring, although a solitaire diamond is just as popular for men’s rings as it among women’s rings. Most importantly, an engagement ring design should reflect the personality and lifestyle of the individual who wears it.

His ring can feature any solitaire stone or even no stone at all. Use his birthstone or integrate intricate carvings and laser inscribed designs within a band. Propose to him with a band inlaid with Koa wood, abalone, opal or even dinosaur bone. You may even symbolize the past, present and future with a three stone diamond or gemstone mangagement ring like this one:

His mangagement ring may also be designed as a masculine mirror of her ring. A round solitaire diamond resting on a gold band can be reimagined for a men’s ring. Use her ring as inspiration for his; perhaps her bezel set diamond engagement ring sets the tone for a more structural and architectural reimagining of his ring.

This men’s ring can also be used as a mangagement design. The squared design nods to masculine craftmanship—note the screws that seem to hold each side in place: 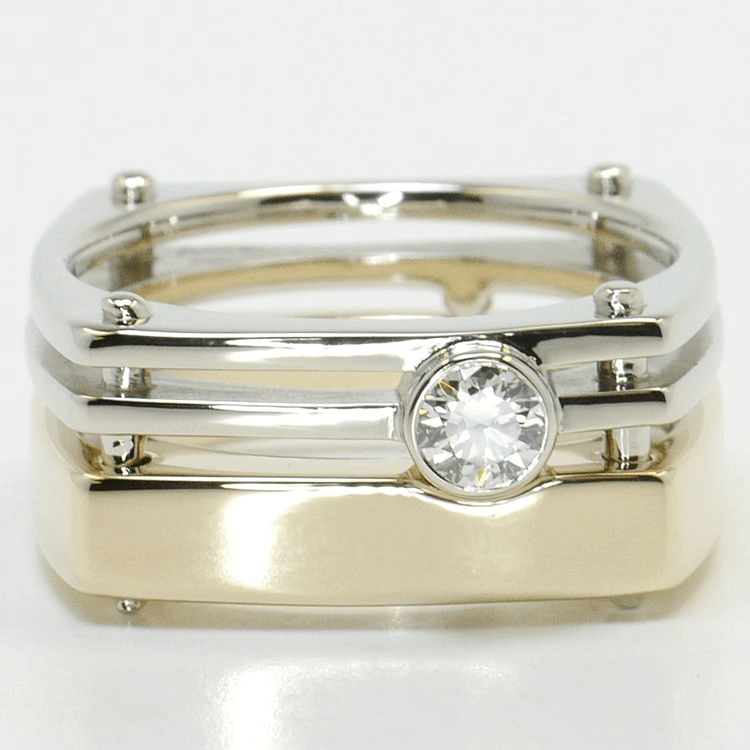 Etiquette dictates that men should plan to spend between one and three month’s salary on an engagement ring for their partner. However, this rule is made to be broken! For young couples struggling to make rent or saddled with student debt, flashy diamond rings are out of the question. Many millennials are choosing to forgo diamonds for unique alternatives that are more personal—and more affordable. Moissanite and gemstones are increasingly popular, as are more cost-effective metals such as tungsten and palladium.

Ultimately, the ring’s price tag should be defined by the buyer’s financial situation. However, the cost of the ring does not make the symbol more beautiful or more meaningful.

Before you purchase a ring, you should review your budget and understand what you can financially afford. Do not commit to any payment that exceeds that bottom line. No ring is worth losing your home, your car, or going bankrupt.

Mangagement After the Wedding

No matter how you wear it—or who wears it—an engagement ring is one of the most recognizable symbols of love and commitment in modern times. Mangagement rings give men the opportunity to tell the world they’re just as “taken” with their partner as their partner is with them. To wear one is a beautiful and powerful gesture, upending tradition and helping set a new trend—one that’s sure to last for many decades to come.