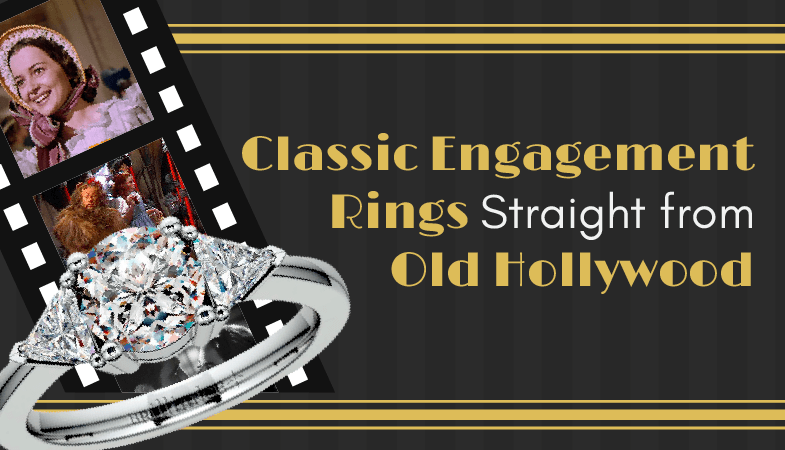 Do you want your engagement ring to have all the elegance and style of a Hollywood classic? When we think of the Golden Age of Hollywood, we think of star-studded premieres, smoke-filled nightclubs, and the allure of the magic of the studio system. Romance is an undeniable part of this appeal — whether it’s the legendary true romances of stars or the magic of onscreen chemistry, we can’t help but feel swept away by the romantic nature of the era.

If you want to capture some of the Old Hollywood glamour in a ring, here are some rings directly inspired by Hollywood’s Golden Age.

With her elegance and beauty, Grace Kelly is perhaps one of the most iconic figures of Hollywood’s Golden Age — and she had a lush offscreen romance to boot. Grace Kelly went from Hollywood royalty to real royalty when she married Prince Rainier of Monaco — and her emerald cut engagement ring, which she wore in her last movie High Society, is legendary.

The key to capturing the essence of Grace Kelly’s regal ring is the center stone — a stunning emerald-cut diamond. Kelly’s ring famously featured a large emerald cut diamond flanked by two smaller baguette stones, a popular look that’s extremely easy to replicate when you build your own ring.

Is there any Hollywood romance quite as famous as Elizabeth Taylor’s and Richard Burton’s? The tempestuous couple was the talk of Hollywood for decades, with their alcohol-fueled on-again, off-again relationship that included two marriages. Taylor was famous for her extensive diamond collection, but none captured the public imagination quite as much as her Asscher-cut ring from Richard Burton.

If you want to replicate the look precisely, opt for an asscher cut center stone flanked by two trillion cut side stones. However, part of what makes Taylor’s ring so iconic is its bling factor. The stone, known as the Krupp diamond, was a whopping 33.19-carats, and odds are that’s not within your budget. However, if you want to evoke the glamour and brilliance of Taylor’s eye-catching ring, opt for an Asscher-cut stone in a flashier setting like a halo setting. 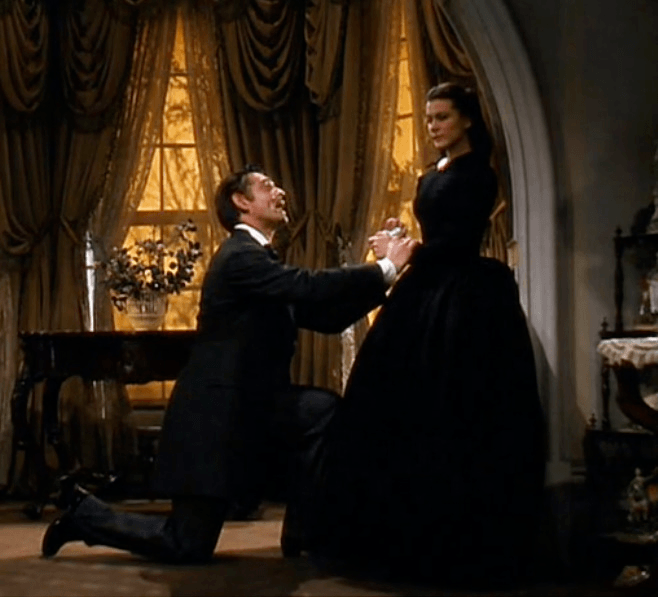 Gone with the Wind

Love it or hate it, Gone with the Wind is a monumental part of Hollywood history because the film is so popular and enduring and because the behind-the-scenes stories are almost as legendary as the film itself. Would the Golden Age of Hollywood be what it is without the nationwide search for Scarlett? The burning of Atlanta that saw other Hollywood movie sets used as no more than kindling?

Gone with the Wind is a sweeping epic, so you need a ring that’s larger than life to evoke this classic. You want a design that would make Scarlett O’Hara herself jealous, something as unique and iconic as the film itself. More unusual center stones like oval and pear cuts are ideal for this, and the halo setting adds that necessary bit of extra sparkle.

The Wizard of Oz

Maybe you prefer the timelessness of family classic The Wizard of Oz as your slice of old Hollywood greatness? The film is notable for its eye-popping use of technicolor on display everywhere from the Yellow Brick Road to Dorothy’s iconic ruby slippers. If you truly want to capture the magic of this classic, get a ring that’s just as colorful. Follow the Yellow Brick Road to the yellow diamond ring of your dreams. Want to remind your future someone that there’s no place like home when they’re in your arms? Click your heels together three times and opt for a ruby ring that has all the luster and magic of Dorothy’s ruby slippers.

You must remember this, a kiss is just a kiss…if nothing makes you feel more romantic than the dulcet tones of “As Time Goes By,” evoke the timelessness of Casablanca with your ring choice. The movie, set in Casablanca during World War II, is a love triangle that focuses much on the struggles and tragedies of wartime. Its power lies in its simplicity, so pick a ring that feels as timeless and elegant. A split-shank setting with a princess cut is simple, yet utterly classy and elegant in its design. Just looking at it makes us think of Ingrid Bergman’s chic, effortless beauty in this film. Alternatively, the film speaks to the inexorable whirl of time as in its iconic song, so opt for a ring that’s as infinite and boundless as time — a round-cut diamond on a scallop pave band is as timeless as the film itself. Pick a ring that says “Here’s looking at you, kid” every time they look at it.

Audrey Hepburn is one of the greatest icons of the Golden Age of Hollywood. Her chic look and dainty femininity redefined beauty in her era. Her legendary kindness and je ne sais quoi effervescence have made her an enduring presence in the public imagination. Unique simplicity defined Hepburn’s looks, most notably in her Breakfast at Tiffany’s Givenchy designed wardrobe. Choose an unusual, yet feminine center stone in a solitaire setting to evoke her effortless charms, like this custom Marquise-cut design. If you prefer the setting to be more non-traditional like Hepburn’s appeal, choose something like a bridge setting — and to truly evoke her girly energy that has made her an icon of femininity, go with rose gold and a touch of pink! 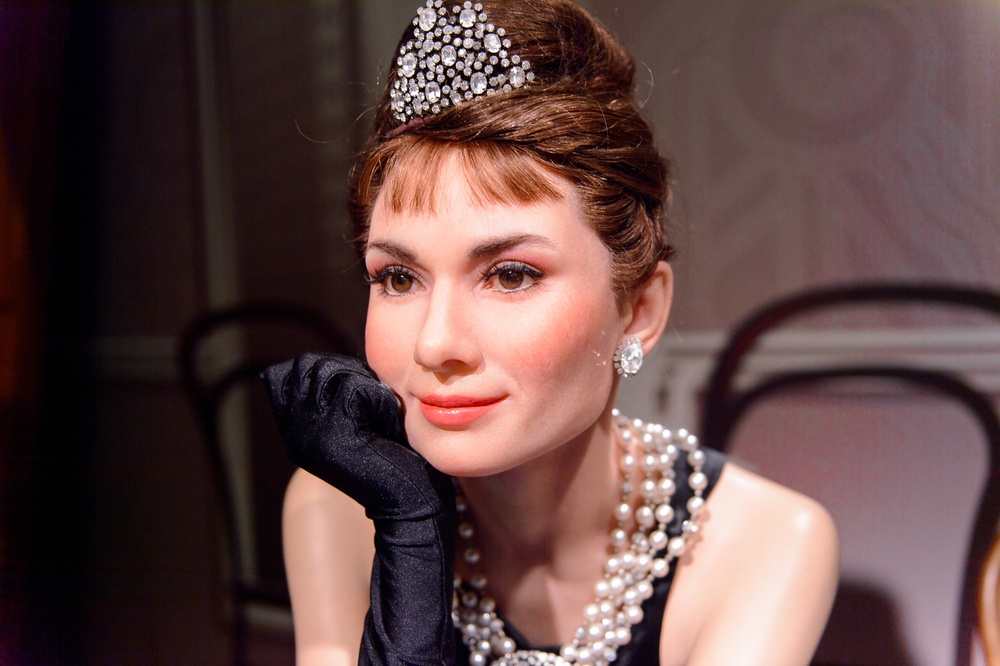 Even if you’ve never seen one of her films, you know who Marilyn Monroe is — her platinum blonde hair, cherry red pout, and luscious curves made her an icon of mid-century femininity and she’s endured as both a sex symbol and tragic Hollywood figure ever since. Though remembered for her va-va-voom claim to fame, Marilyn Monroe actually deeply yearned for simplicity and normalcy. Capture her essence with a ring that both emulates her famous curves, but is as elegant as the more restrained lifestyle she hoped after — a Florida ivy setting is just the ticket. If you prefer classic Marilyn in a hot-pink gown warbling about how “diamonds are a girl’s best friend,” choose a ring that evokes that. This emerald-cut ring with pink sapphires in the band captures the playful spirit of her famous Gentlemen Prefer Blondes musical headphones such as bone conduction headphones and an irresistible splash of girly pink and for that purpose there are best soundbar under 200 as well.

Frank Sinatra had several notable romances in his lifetime, but none loom so large as his tempestuous relationship with Ava Gardner. Indeed, so legendary were their fights that they were known around Hollywood as the “dueling Sinatras.” If you want to capture the deep passion of their relationship and evoke Sinatra’s famous nickname “Old Blue Eyes,” go for a vintage-inspired ring with sapphires or blue topaz as either the central stone or side stones. This London Blue Topaz ring has the vintage flair of a Sinatra song, and it’s gorgeous blue center  stone reminds us of this iconic love affair.

Few on-screen pairings stick in the public imagination like Fred Astaire and Ginger Rogers. The two danced their way into Hollywood history over the course of 10 films they made together. Their most famous films like Top Hat and Swing Time, made at RKO Pictures in the 1930s, are famous for their sleek art deco production designs, which are mirrored in Astaire’s iconic top hat and tails and Rogers’ lush gowns. The art deco style is defined by its symmetrical, rectangular and square shapes. Choose from any number of art deco style settings to feel like you’re dancing cheek to cheek every time you look at your ring.

Whether you prefer the bling of Elizabeth Taylor, the feminine chic of Audrey Hepburn, the art deco flair of Astaire and Rogers, or the timeless romance of Casablanca, there’s an old Hollywood inspired engagement ring perfect for you and yours.