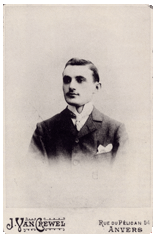 Today, we’re unveiling the second article in Brilliance.com’s latest feature series, “World’s Greatest Diamond Cutters.” Our homage to the best diamond cleavers continues with an in-depth look into the life and creations of Antwerp’s Lazare Kaplan.

For months, he studied the giant stone. Some say he “lived, ate, and breathed” the diamond, spending every minute examining its features, determining the best way to perfectly cleave this beast. After a year of gazing through its frosty, challenging surface, creating many models of the stone, and reviewing many mathematical formulas to calculate the precise cleavage lines, master diamond cutter Lazare Kaplan scratched a wedge into the stone and placed his knife into the wedge. He raised his mallet and was about to strike the end of his knife when something caught his eye. A bend in the surface of the stone made Kaplan slowly lower his mallet and reinspect the diamond. Realizing he would’ve made a massive error by cleaving the diamond along the original line, he drew a second line, created another wedge, and cleaved the 726-carat Jonker diamond perfectly.

Descended from three generations of jewelers, Russian-born Lazare Kaplan grew up in Belgium. In 1896, at the young age of 13, Kaplan began his apprenticeship at his uncle’s diamond cutting factory. His manual dexterity and knack for cleaving flawed and irregular stones made Kaplan one of the most well-known diamond cutters of his time. At age 20, Kaplan started his own diamond business and became one of Antwerp’s leading diamond cleavers.

Kaplan started a family and, since his business was very successful, he decided to take his family to the U.S. to visit his mother in New York. While on vacation, World War I broke out. The Germans overran Belgium, destroying Kaplan’s business. He decided to start over and built a small shop in lower Manhattan. Again, Kaplan’s immaculate work and attention to detail made him very popular in the diamond-cutting industry. As his business grew, he needed more workers (which were in short supply due to the labor shortage in the U.S.), so he went to Puerto Rico where he found many highly capable men eager to learn the trade. Kaplan created an apprenticeship program, launching a new industry of diamond cutters and polishers trained in the “Lazare Kaplan tradition.” This training program provided the workers with skills said to exceed the highest standards in the international diamond industry.

In 1919, Kaplan’s cousin, Marcel Tolkowsky, developed the mathematical formula used to create “ideal cut diamonds.” This formula determined the precise angles and proportions necessary to give the diamond the ability to optimally reflect and refract light, giving the stone the maximum amount of sparkle, brilliance, and fire. To this day, Lazare Kaplan International still uses this formula to cut ideal diamonds.

Business was again booming for Kaplan until 1929 when the stock market crashed, ruining his business again. By this time, his son, Leo, was working for him and managed to save every penny his father paid him in the diamond company. Leo withdrew the $300 he saved and loaned it to his father to rebuild his business.

Kaplan’s claim to fame came in 1936 when Harry Winston commissioned him to cut the 726-carat Jonker diamond. While the stone was insured for one-million dollars, the insurance did not cover the cleaving operation, putting even more pressure on Kaplan to provide an expert cut. Prior to hiring Kaplan for the job, Winston consulted with the best European cutters on the best way to cleave the Jonker. The majority of the European cutters agreed on the best way to cut the stone, but Kaplan had a slightly different idea–one that would result in a slightly greater loss of carat weight, but obtain the maximum fire and brilliance in each of the cut gemstones. Kaplan later called the Jonker a “freak of nature” because what appeared to be a cleavage plane on the surface, was not the cleavage at all. In fact, had Kaplan split the stone at the false cleavage plane, he may have ruined the stone.

The 13 resulting gems ranged in size from a 3.53 carat Baguette to a 142.9 carat Emerald cut. The latter retained the name “Jonker,” and featured 66 facets. It was later re-cut to change the proportions and give the stone a more oblong shape with greater brilliance. Many experts have inspected the cut diamond, most of whom call it the “most perfectly cut gem in existence.”

While cutting the Jonker was Kaplan’s most notable achievement, he also created the “Oval Elegance” diamond cut. Not an easy cut to achieve, Kaplan lent his cutting talents to create an oval cut stone with 58-facets. He said this spectacular cut made the stone appear larger than its round counterpart of the same carat weight, and produced more brilliance than other fancy cuts.

Recognized by the Gemological Institute of America in 1964, Kaplan’s contributions to the jewelry industry earned him the title of “honorary vice president.” In 1979, Kaplan was presented with the first international Hall of Fame Award for Jewelry Leadership by the Retail Jewelers of America (RJA). Board chairman and executive director, Michael Roman, said, “[Kaplan’s] great imagination and extraordinary ability to visualize diamond shapes in three dimension in the original crystal are the reasons many consider him the world’s premier diamond cutter.”

An amazing diamond cutter recognized for over 75 years of innovative diamond designs and cutting, Lazare Kaplan died at the age of 102 at his farm in Sullivan County, New York. His company still thrives today as Lazare Kaplan International–the only U.S. diamond cutting firm listed on AMEX, and the company owning the worldwide patent on the diamond laser inscription process.