The beautiful amethyst is February’s gemstone, and the latest subject in a series of Brilliance infographics on birthstones. Its named is derived from the ancient Greek word “methustos”, which means intoxicated. The amethyst is believed to prevent intoxication, because Greek mythology tells of how the tears of Dionysus, the god of wine and revelry, gave this stone its rich purple color.

The amethyst boasts a history as colorful and rich as its hue. Ancient Egyptians used it to engrave gems, intaglio style. They have also been dug up in Anglo-Saxon graves in England. Owing to its color, the amethyst came to symbolize royalty in the Middle Ages. It was only in 1912 when the American National Association of Jewelers declared it as the official February birthstone. It is also the birthstone of vibrant Piscean celebrities Ashton Kutcher, Paris Hilton, Chloe Moretz, and more.

Primary colors of purple and violet give the amethyst its gorgeous hue, harmonizing beautifully with secondary colors of red and blue. It has two variants: the Deep Russian and the Deep Siberian. Well-known mining sites for this particular gemstone include Russia, South Korea, Austria, India, Sri Lanka, Zambia, Brazil, Uruguay, Canada, and the United States. These days, an amethyst is worth somewhere between $7 to $65 per carat.

There is much more to the amethyst than its pretty looks. Learn more about this February gemstone with the newest infographic Brilliance has to offer. 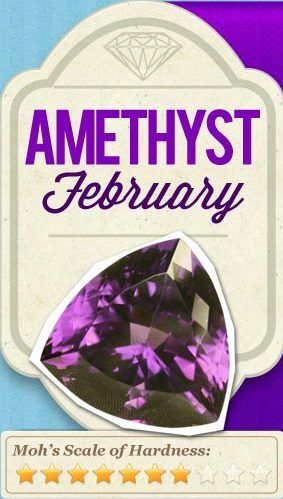