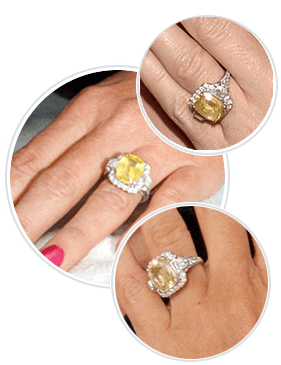 Jenny McCarthy’s engagement ring from Donnie Wahlberg complements her style and blonde beauty perfectly. Featuring a massive 10-carat yellow sapphire at its center, the ring is set in 18-karat white gold and the band is encrusted with diamonds. The gallery features diamonds as well, and a diamond halo adds the finishing touch.

Like Jenny McCarthy’s engagement ring, this stunning custom ring from Brilliance features a fancy yellow center stone surrounded by a glimmering halo of white diamonds. The center stone is held in place with yellow prongs rather than platinum to keep the overall look of the ring well-balanced, while the band and halo bring additional glamor. While this particular Jenny McCarthy inspired engagement ring is set in platinum, it also looks incredible in white gold.

Born on November 1, 1972, Jenny McCarthy is an American television host, model, author, and comedic actress.After getting her start in Playboy magazine in 1993, she cohosted a dating show called ‘Singled Out’ on MTV. The following year, she landed a small part in The Stupids before launching MTV sketch comedy The Jenny McCarthy Show.

1998 saw McCarthy taking on a major role alongside Matt Stone and Trey Parker in the movie BASEketball. She starred in Diamonds in 1999, and in 2000, she had a role in the horror film Scream 3. Three years later, she parodied the same role in the spoof horror Scary Movie 3.

Jenny has guest starred on a number of television shows including Charmed, Stacked, Wings, The Drew Carey Show, Fastlane, Just Shoot Me!, and Two and a half Men. She played the voice if Six in the thirsted season of Tripping the Rift, a Canadian computer-animated sci-fi cartoon.

In 2005, McCarthy hosted ‘Party at the Palms’ on E! The reality show, filmed at Las Vegas’ Palms Hotel, featured partygoers, celebrities, and other hotel guests. In 2007, she starred alongside Leah Remini and Chelsea Handler in a five-episode online series called ‘In the Motherhood.’ The show was based on being a mother, and allowed users to submit their stories for future MSN webisodes.

December 31, 2010, saw McCarthy acting as a news correspondent in Times Square during Dick Clark’s New Year’s Rockin’ Eve. She also appeared in the 40th anniversary edition of the show, gaining even more popularity for kissing a nearby New York City cop on-air. In 2012, she gave a New Year’s kiss to a United States Merchant Marine Academy midshipman during the show.

Jenny is perhaps best known for her role on ABC’s show The View. She made 17 guest appearances before being announced as a co-host, debuting on September 9, 2013, and calling it a wrap in June of 2014.
Did you know that Jenny McCarthy has appeared in two video games? She played the role of Agent Tanya in the game Command and Conquer: Red Alert 3, and she stars in a fitness video game called Your Shape Featuring Jenny McCarthy.

Jenny McCarthy and former husband John Mallory Asher have a son, Evan Joseph, together. He was born in 2002, three years prior to the couple’s 2005 divorce. McCarthy dated actor Jim Carrey from 2005 to 2010. She announced that she was dating Donnie Wahlberg in July of 2013, and the couple announced their engagement live on The View on April 16th of 2014. They tied the knot on August 31st that same year.

What Our Experts Have to Say about Jenny McCarthy’s Engagement Ring.
While many stars and Hollywood jewelers keep mum about celebrity engagement rings, Jenny McCarthy has happily shared details about her ring with her fans. Donnie Wahlberg chose the massive ring with the help of celebrity jeweler Daniel Arik, however Arik told E! that Wahlberg already had a good idea of what he wanted.

Jenny McCarthy’s engagement ring is over 10 carats, with plenty of additional sparkle from a diamond halo and diamonds on the band. Like many celebrity engagement rings – and rings made for Brilliance clients from around the world – it is a custom design. While working with a Hollywood jeweler is something not many people have in mind, the concept of a custom engagement ring is one whose time has come. Using the easy online tools at Brilliance, you can create a Jenny McCarthy inspired engagement ring of your own. Our jewelry experts are happy to help you create a design that suits your style as well as your pocketbook! With Brilliance by your side, you’ll discover that it’s simple to create a gorgeous style that expresses the unique love you and your life partner share.