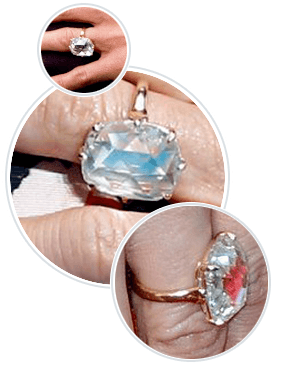 A-listers Jennifer Aniston and Justin Theroux have enjoyed a long, romantic relationship that’s been sealed with one of the most talked about celebrity engagement rings in history. The couple has been engaged since 2012 and though their relationship has remained hot, there’s no word of impending nuptials yet.

Jennifer was completely surprised by Justin’s proposal and told People Magazine that she was impressed by the ring he chose, saying he “worked with the girls that I have worked with for years and years, so he kind of was picking the specialists’ brains. He kept it within a very small circle of people. It was one of the sneakiest jobs I’ve seen, actually.” She also said that she had no idea what kind of engagement ring she wanted, and that Justin “just knows what I like.”

So, what kind of engagement ring suits Jennifer Aniston? Although no one knows much about the ring itself or its designer, we’ve gotten a good look. Though featuring a very large diamond solitaire in the eight to nine carat range, it’s fairly simple as celebrity engagement ring designs go; the setting is a simple one in gleaming yellow gold that suits America’s Sweetheart’s gorgeous blond coloring.

Like Jennifer Aniston’s engagement ring, this stunning diamond is showcased by a plain setting that allows the stone to speak for itself. It’s just one example of our fine selection of famous engagement rings, and can be customized to meet specific requirements, beginning with your choice of the thousands of loose diamonds we have on offer.

Born February 11 of 1969, Jennifer Aniston gained international recognition for her portrayal of Rachel Green on the TV sitcom Friends, which aired from 1994 to 2004, earning a Golden Globe Award, and Emmy Award, and a Screen Actors Guild Award. She received a star on Hollywood’s Walk of Fame in 2012. Jennifer was previously married to Brad Pitt, with the relationship ending in 2005. She has stated that she has no regrets, and that the relationship was both “beautiful and complicated.”

As for her career, Aniston’s is an incredibly successful one. Not only has she appeared in numerous commercial and music videos, she has starred in a long list of movies ranging from comedies to dramas. Like many other celebrities, Jennifer Aniston is actively involved in a number of philanthropic endeavors. In 2013, she received the honor of being named as the Entertainment Industry Foundation ambassador for Saks Fifth Avenue’s Key to the Cure campaign, which raises funding for cancer research with a focus on detecting, treating, and curing women’s cancers.

Did you know Jennifer Aniston was the first-ever GQ Woman of the Year? She received this honor in 2005, and has frequently been named as one of People’s “Most Beautiful.”

What Our Experts Have to Say about Jennifer Aniston’s Engagement Ring.
Jennifer Aniston’s engagement ring is the subject of a lot of speculation. At first glimpse, it appeared to be an oval cut diamond set in a halo, maybe with pave diamonds on the shank. After catching a closer look at the Oscars, we’ve determined that it is a trend-setting oval shaped cushion-cut solitaire set in yellow gold. The diamond is likely of fine quality, and although conservative estimates place it in the eight to nine carat range, it may be ten carats or higher, meaning that Jennifer Aniston’s engagement ring is likely worth more than a million dollars.

Celebrity jewelry tends to be over the top, and though this ring features a sleek, simple design, it definitely catches the eye. Despite the high price tags typically associated with celebrity engagement rings, it’s simple to find similar, yet much more affordable rings on Brilliance – and to have a custom ring created to suit your taste. Whether you choose one of the popular designs from our collection or design a Hollywood engagement ring of your own, you are certain to love the sparkle it brings into your life.