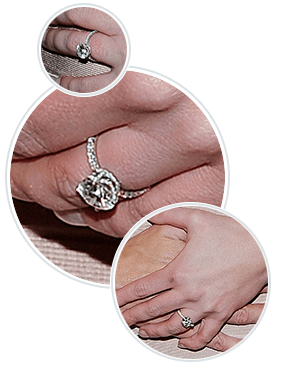 Britney Spears’ engagement ring from former beau Jason Trawick is a gorgeous one – as well as the subject of much discussion and controversy. The third engagement ring given to Britney Spears after divorces from former husbands Jason Alexander and Kevin Federline, it was presented in December of 2011 and made its debut during a birthday celebration at Planet Hollywood. The ring reportedly cost Trawick a whopping $90,000 USD, and was designed by celebrity jeweler Neil Lane. Jason was Britney’s former agent, and he had a huge amount of insight into her style, meaning this particular celebrity engagement ring is one that truly resonated with its wearer. Featuring a four-carat center stone and 90 sparkling pave diamonds on its band, the setting is crown-shaped, delicate looking, and just the right fit for Britney’s hand. Sadly – but understandably – Britney recently returned the ring to Jason, ending their engagement.

Like Britney Spears’ engagement ring, this beautiful example from Brilliance is stunning in its beautiful, symmetrical simplicity. Featuring a classic brilliant cut diamond that sparkles at its center, and embellished with more than seventy page diamonds that dance along its shanks and sides, it offers a timeless look you’ll proudly show off for the rest of your life.

Born in McComb, Mississippi on December 2, 1981, and raised in Kentwood, Louisiana, Britney Spears is one of America’s top recording artists. She starred in stage productions and on TV shows as a child before her 1997 debut with Jive Records, ultimately releasing studio albums that topped the charts and broke international sales records.

Despite some sad personal issues, Britney has continued to display passion for her art, and has overcome a number of serious challenges that would overwhelm a lesser person. Her life as a pop icon and teen idol has earned her the title of “Princess of Pop,” and her work has earned a huge number of awards including six MTV Video Music Awards, a Grammy Award, nine Billboard awards, and a star on Hollywood’s Walk of Fame, to name just a few. Forbes reported that she was the highest paid female musician of 2012, and Billboard named her music’s sexiest woman.

Britney’s legacy has already been firmly cemented into place, particularly as Rolling Stone magazine wrote that she is “one of the most controversial and successful female vocalists of the 21st century.” The Guinness Book of World Records lists Britney Spears as having the “Best-selling album by a teenage solo artist” for debut album Baby One More Time, and she is among the most-followed celebrities on Google+. No doubt, there are many great things waiting for Britney, both in her personal and professional life.

Did you know that Britney Spears is much more than a superstar? She is also a famous philanthropist, participating in a number of highly publicized relief efforts. She founded the Britney Spears Foundation to help children in need.

What Our Experts Have to Say about Britney Spears’s Engagement Ring.
Britney Spears’ engagement ring is a gorgeous piece of jewelry that speaks volumes about Jason Tradwick’s affection for her. Although the diamond at its center is “only” four carats, which is microscopic by today’s Hollywood jewelry standards, it is a truly spectacular stone that doesn’t overpower Britney’s hand. The ring is designed to be worn and enjoyed for a lifetime, and its value is nothing to sneeze at – probably close to $100,000.

Celebrity engagement rings like the one Jason Tradwick gave Britney Spears usually do come with sky-high price tags, and that’s partly why we love them! The fact is, though, that most of us can’t afford to spend six figures on a single piece of jewelry. Luckily, Brilliance offers a solution: Gorgeous, handcrafted engagement rings made with conflict-free diamonds at prices that are affordable. Whether you work with the diamond experts at Brilliance to create a custom engagement ring or select one of the thousands of preset engagement rings available, you’ll find the results are nothing short of astonishing.