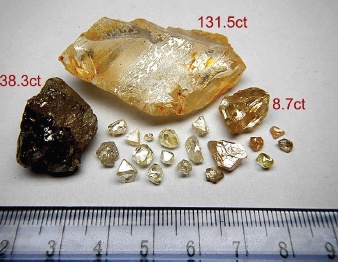 The Australian mining company Lonrho Mining Ltd. has discovered a gem-quality 131.5 carat diamond alongside a 38.3 carat diamond from its Lulo Diamond Concession in the African country of Angola. The 38.3 carat stone was also from the same alluvial bulk sample where the former was found, and is the third biggest diamond recovered from the concession to date. This diamond is the biggest one discovered by the Perth-based company since its partnership with Endiama, the national diamond company of Angola.

The discovery of the 131.5 carat diamond is significant, as based on a report by Bloomberg, because it has outsized one of the former title-bearers of ‘world’s largest diamond’, the Koh-I-Noor. At 105.6 carats, it was also known as the ‘Mountain of Light’ and the ‘King of Jewels’ in the history of precious gems. It is now incorporated in the platinum crown of the late Queen Elizabeth of the British monarchy.

The 545.67 carat Golden Jubilee was the contender that beat the Cullinan I in being the largest polished diamond in 1985. It is currently owned by King Bhumibol Adulyadej, the reigning monarch of Thailand. It was presented to him in honor of his 50th coronation anniversary. The Golden Jubilee is now housed in the Grand Palace in Bangkok.

The two Angolan diamonds were found during Lonrho’s preparations to commence drilling on the sixty-one kimberlite sites throughout  the concession area, which covers around 3,000 square kilometers of mining land. Kimberlite is a kind of volcanic rock, considered the main source of diamonds. According to Lonrho managing director Miles Kennedy, “Given the incredible size of this diamond, there is little doubt the kimberlite source is very close by.”

No value estimate has been given for the stone yet, as it is still to be subjected to evaluation by diamond experts. Lonrho is optimistic about the exploration potential of the Lulo Concession as it proceeds to undertake its drilling operations in the African country. According to DeBeers, the world’s leading diamond company, Angola follows behind Botswana, Canada, Russia and South Africa as the world’s largest diamond producer by value. Investors in the Angolan mining industry are starting to have high hopes because of this recent discovery.