Mark Zuckerberg, Facebook’s founder, and his girlfriend, Priscilla Chan got married over the weekend in a surprise ceremony in their home in Palo Alto, California once Facebook went public. Guests were under the impression that they were there to celebrate Priscilla’s surprise party for graduating medical school. The ceremony, which took place in the couple’s backyard, was very modest and intimate with as little as 100 guests.

Although pictures of the wedding haven’t been released yet, insiders at People magazine were told that Chan wore a stunning dress, AKA “Sky Between the Branches”, by designer Claire Pettibone worth $4,700. Fashion moguls can snatch the same gown at New York’s Kleinfeld. Kleinfeld’s has already sold 15 of these gowns since 2010. According to People magazine, Zuckerberg helped design Chan’s ruby engagement ring.

What a big week for Zuckerberg; Facebook went public, celebrated his 28th birthday and now married to his college sweetheart! Congrats Zuckerberg and Chan from all of us at Brilliance. 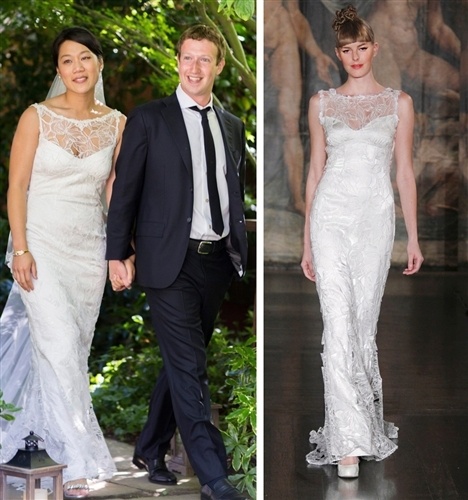