Who’s Who in the Wedding Party: Roles and Responsibilities 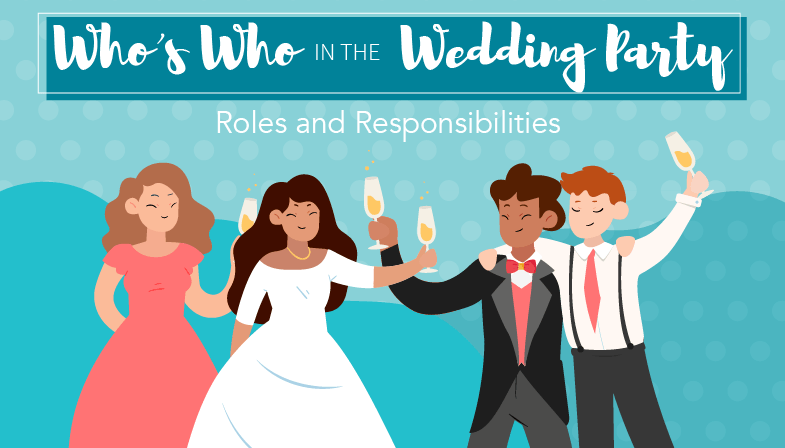 Choosing the wedding party can be one of the hardest decisions for brides and/or grooms. Failing to select a friend might lead them to feel hurt, and siblings also may feel the pain of being bumped from the ‘party.’ Some couples insist that all siblings take part in the wedding in some way—as an attendant, usher or some other special role. Other couples might have tense relations with a sibling or family member and opt not to include them. Friends, cousins, nieces and nephews or perhaps Godchildren, however, are typically top choices for wedding party members and honor attendants.

The Knot 2017 Real Weddings Study revealed that ‘five’ is the magic number for the wedding party. Brides and grooms reportedly both selected—on average—five attendants each. While the number of attendants selected can vary significantly, the roles of these attendants are typically the same for most wedding parties. Although, some brides and/or grooms may be a bit more demanding as to what they need from an honor or other attendant. Bridezillas and Groomzillas are real!

If you’re planning your wedding and beginning to select your wedding party, here’s what you need to know about each attendant and their role in your wedding.

A Maid of Honor is typically an unmarried woman. Yes, the term ‘maid’ can seem extremely outdated and—well—maybe even problematic. But just think of ‘maid’ as a shortened form of ‘maiden.’ The role of the ‘Maid of Honor’ is a top position. She is the senior attendant, and her role is to take the lead on planning and service to the bride. But this role doesn’t have to go to a woman; brides also can appoint a Man of Honor.

The Maid of Honor is responsible for:

The Matron of Honor is a position given only to a woman who is married. Her duties are the same as the Maid of Honor. And, yes, brides may appoint both a Maid and Matron of Honor. In fact, this is often a great way to ensure that top roles for close friends or siblings when choosing between one or the other could result in hurt feelings. Brides also can choose two Matron or Maids of Honor.

When a wedding party includes both a Matron and Maid of Honor, the two women typically split the duties. 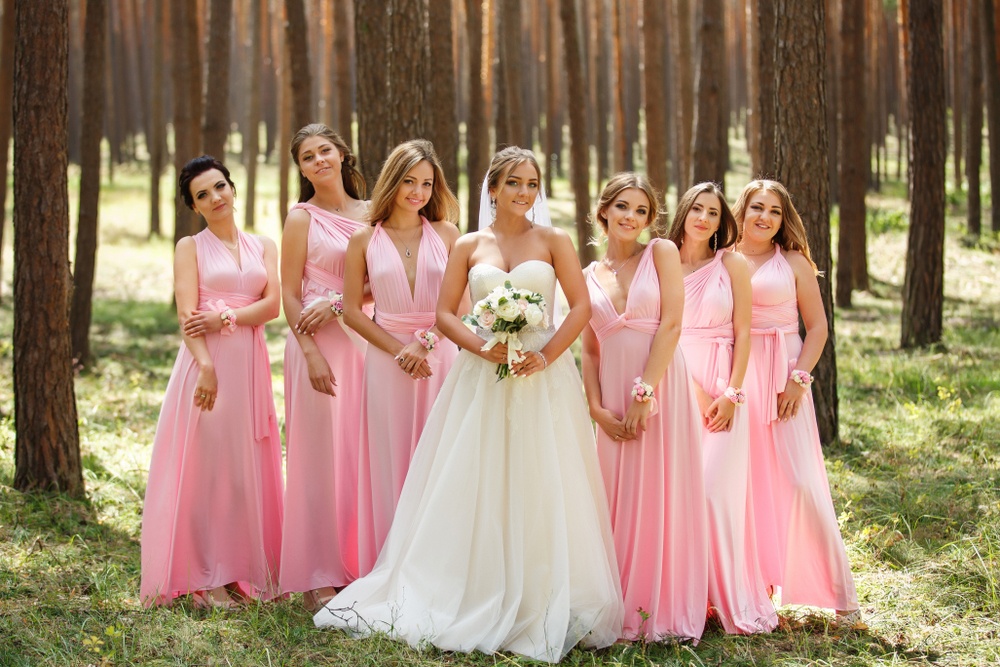 The bride can select as many bridesmaids as she wishes. But remember that the more attendants you choose, the longer the processional will last. You also need to ensure that your church or wedding site has room for all the bridesmaids to gather in the front. While choosing a long list of bridesmaids is a great way to ensure that all friends and family are included, the ‘party’ could begin to feel a bit crowded. Use your own discretion when selecting your final number.

So what is the role of the bridesmaid? Here’s what to expect (not demand!) of your attendants:

Parents of the Bride

While the Parents of the Bride aren’t considered part of the wedding party, they are honorary members in many ways. Traditionally, the bride’s family has one of the largest roles at the wedding. As more and more couples are waiting to get married until they are older, the role of the bride’s parents has sometimes changed.

Traditionally, the Parents of the Bride are responsible for:

The groom can also choose as many attendants as he likes. However, the groom has a little bit more room in his party to allow for more friends or family members. While the bride’s side traditionally includes honor attendants and bridesmaids, the groom gets to select his Best Man (or Men), groomsmen and ushers.

The Best Man is the groom’s main attendant. His role is similar to the Maid or Matron of Honor. But a groom also can elect to have a Best Woman if he chooses.

Regardless of the title, the grooms Best attendant is responsible for:

The groomsmen have a pretty easy role. Like the bridesmaids, groomsmen are wedding party assistants.

Parents of the Groom

The groom’s parents may opt to share part of the cost of the wedding. Some families split the bill, but financial obligations are personal to each couple, their preferences, and their culture.

In a traditional sense, the groom’s parents:

Other Members of the Wedding Party

Many couples opt for a wedding party that includes other roles. Often, brides will appoint a flower girl, while grooms select a ring bearer. Junior bridesmaids and guest book attendants or candle lighters also are popular roles given to younger family members or to the children of close friends. These roles are also ideal for couples who have children and wish to have them in the wedding party (if the children aren’t old enough for more senior roles).

The flower girl role is typically reserved for younger children—perhaps even toddlers. She carries a basket or a bouquet. Traditionally, the flower girl scatters petals down the aisle as the bride enters the ceremony. The flower girl may or may not attend a bridal shower (this is up to the discretion of the bride).

The ring bearer is also traditionally reserved for younger children. He typically carries a pillow with a ring tied to a ribbon and may escort the flower girl. Most couples do not place their actual wedding bands on the ring bearer’s pillow.

These positions are reserved for pre-teens. They hold similar responsibilities as regular bridesmaids and groomsmen, but junior attendants aren’t responsible (or involved) in planning or participating in showers or other parties for the couple.

Most couples will appoint a group of their friends or family members as members of their wedding party, but the choice of who is included can be difficult. However, brides and grooms can have as many attendants as they wish. And there are many different roles to include in the wedding party that ensure that close friends and beloved family members get to play an active part in the couple’s big day. Remember that roles can be changed—a bride can have a Man of Honor and a groom can choose a Best Woman! When choosing attendants, it doesn’t matter who plays what role. The day is about love, and your attendants should be those who love and cherish you!