8 Vow Renewal Ideas to Celebrate Every Decade of Your Marriage 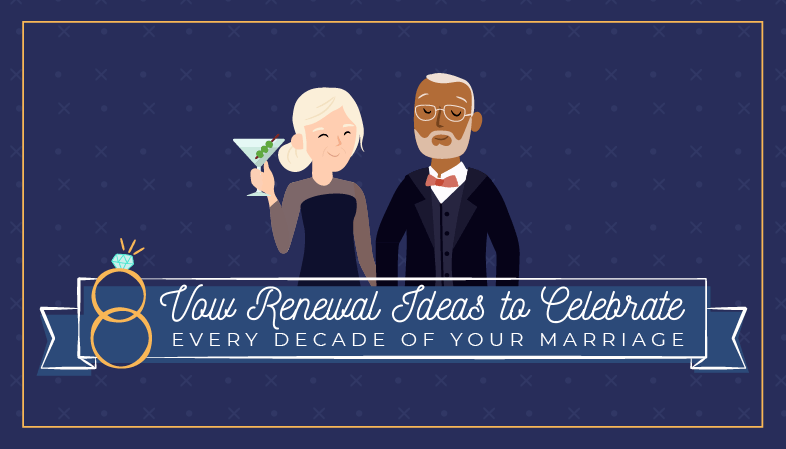 It’s time to celebrate your anniversary and you want to do something special. Have you considered a vow renewal ceremony?

Vow renewal is a practice that became popular in the United States during the 1970s and has only increased in popularity in the decades since, as a way for married couples to renew their pledge of love and fidelity to each other.

A vow renewal ceremony can take many forms, from a big party and reception on the scale of a wedding itself, to a small, intimate gathering with only the closest family and friends.

For many couples, a vow renewal can also be an opportunity to have the wedding they weren’t able to have when they were younger because of extenuating circumstances like finances, family drama, and more. Plus, it’s a chance to celebrate your marriage with old friends and family, but also welcome those who might not have been at your wedding day, like neighbors that have become close friends, coworkers, or your children.

Here are some ideas for celebrating a vow renewal during every decade of your marriage.

Are you movie lovers? Have a Wizard of Oz themed ceremony where one of you dresses as the Tin Man. If you’re working on a tight budget, that’s ok, do something clever and creative like exchanging vows using tinfoil rings, which will celebrate this milestone with a playful touch.

The second decade of marriage presents two fabulous opportunities for celebration — the china anniversary in the 20th year and the silver anniversary of the 25th. Platinum is the traditional gift for the 20th wedding anniversary, so you could have new rings made out of those metals to wear alongside your wedding bands after exchanging them in a vow renewal ceremony.

In terms of ceremony themes, for the 20th anniversary, play up the china theme and have a tea party for your vow renewals (or take the china suggestion to a more metaphorical zone and opt for a Chinese New Year theme complete with fireworks!).

30th anniversary traditions take to the seas for the pearl anniversary. This is the perfect opportunity for a beachy twist on your vow renewal ceremonies. Head down to the water’s edge for a beach bash or take a family trip to Hawaii or invite everyone for a harbor cruise. Decorate with seashells, mermaid-inspired flair, and more.

The fourth decade of marriage is a colorful one with the ruby and sapphire anniversaries marking your 40th and 45th years together. The traditional gifts are the names of the gemstones associated with the anniversary, so go full ruby red or stunning sapphire blue in everything from your decorations to your gifts to each other (add a gemstone to a wedding band or purchase new ones to match the old).

Ruby is such a swanky anniversary that it’s only fitting to have a reception (intimate or huge) kitted out in lush shades of red. Deck out your space in red velvet curtains with matching tablecloths and hire a professional jazz band to create the perfect mood. There are, of course, less traditional approaches, like a Queen of Hearts/Alice in Wonderland theme to accompany the ruby anniversary. For something super playful, recreate Aladdin’s cave of wonder full of gemstones and rubies for a fairy-tale inspired celebration. Or go more lowkey with a party in a garden full of ruby red roses.

Your 50th anniversary is pure gold. Celebrate five decades of wedded bliss with a gilt gold party, whether you go for an art deco inspired 1920s speakeasy theme or turn to the Golden Age of Hollywood for inspiration. Does your wedding date fall in awards season? Celebrate your anniversary in accordance with the Oscars to truly amp up the gold factor.

A lot of people choose to do very traditional parties with dinner and dancing as this is such a huge milestone, but you should do whatever feels right to it. If your take on the gold theme is some Jose Cuervo gold and a Mexican fiesta, then go for it. Gold is also the corresponding gift, but since these are such big anniversaries, try something unique. If you’re having a big, fancy party, buy a matching gold tiara and cufflinks to wear on the day.

If you’ve made it through six decades together, you’re in it for the long haul. This is the diamond anniversary and since diamonds are forever, what better way to celebrate than a James Bond themed event complete with tuxes and martinis (shaken not stirred). Elizabeth Taylor was the queen of diamonds, so if you want some old Hollywood glamour to throw yourself a Liz Taylor party, whether that means gathering to watch some of her most famous films or decking out your event venue in an elegance and decadence befitting the classic screen siren. There are plenty of places around the country where you can visit small diamond mines and try your hand at finding a stone — if you want something more hands-on, that’s a perfect anniversary outing. Whatever you do, make sure it has all the sparkle and pizazz of a diamond.

By the time you’ve hit seven decades, you’re a platinum baby. Platinum is a precious metal perfect for anything from wedding bands to a jewelry plate or decorative tray commemorating your 70 years together. In today’s world, platinum has come to represent the most elite spheres, whether it’s a level you hit on a credit card or the number of records a musical artist sells. Your party should be just as elite, so choose an exclusive destination whether it’s at a treasured family country club or somewhere truly stratospheric like a ski resort.

For something more DIY, have a backyard bash with dancing and theme your decorations and playlist to your favorite platinum artists over the years. Any album that went platinum is eligible for inclusion.

80th anniversary: Under the Oaks

The 80th anniversary, should one be so lucky to make it that far, is the oak celebration. Naturally, the ideal setting for a vow renewal after eight decades would be a winery under a set of beautiful oak trees. Or any forest setting would be the picture perfect setting for this truly rare celebration. From an expensive bottle of wine aged in fine oak to an oak carving commemorating your love, the gift options here are slightly more unique than a traditional piece of jewelry.

No matter whether you’ve been together for one year or eighty, your love is worth celebrating. Choose a unique setting themed to the decade of your marriage for a vow renewal you and your loved ones will remember forever.