The Diamond – A Symbol of Eternal Love

People say that diamonds are a girl’s best friend. Diamonds often receive attention and dominate other precious stones. It has been known to mankind for ages and has been used since the ancient times.

Diamonds are thought to have been first mined in India 4000 years ago. They were found in the alluvial deposits of the stone along the rivers of Krishna, Penner, and Godavari. The Hindus attributed so much power to them they even used them as the eyes of stone deities. Diamonds were also used for decorative purposes and as a talisman to ward off evil or provide protection in battle.

Initially, many believed diamonds could bring luck and success and could counter astrological events. There were people that wore diamonds as charms believing in their ability to heighten sexual prowess and attract others. Plato even wrote about diamonds as living beings, embodying celestial spirits.

But although it has been associated with romantic love before; in the ancient times, the first engagement symbol dating as far back as the prehistoric age, was only a woven cord of rushes (grasses, reeds) or leather that a caveman would tie around the hands and feet of a female mate so she couldn’t escape. Once the caveman was sure she wouldn’t leave, he would untie her, only keeping a small cord tied around her finger. Not only until 1477 were that diamonds used as engagement rings. This is the year when Archduke Maximillian of Austria gave a diamond ring to Mary of Burgundy upon their betrothal. This then influenced those of higher social class and of significant wealth to give diamond rings to their loved ones. 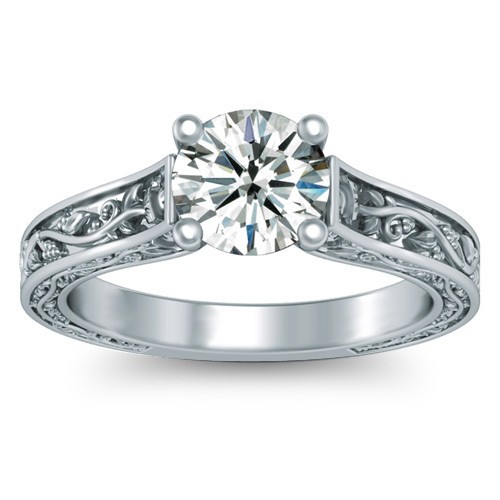 For the next centuries, diamond engagement rings were only limited to the rich and noble families because of the small supply of diamonds. But in 1870, diamond mines in South Africa were discovered and this greatly increased the availability and affordability of diamonds to the public.

As demands have been met by supplies from South African diamond mines, declining costs allowed even non-royal families to invest in diamonds increasing sales in Europe and United States. In the late 1930s, the United States became the premium marketplace for high-quality diamonds, effectively making diamond engagement rings a common choice in America.

Since then, it has been a custom to use diamonds not only in engagement rings but also in gifts to women as well. It is now estimated that 78 percent of all engagement rings sold every year are diamond. With this, diamond is the ultimate romantic symbol of love and eternity indeed.